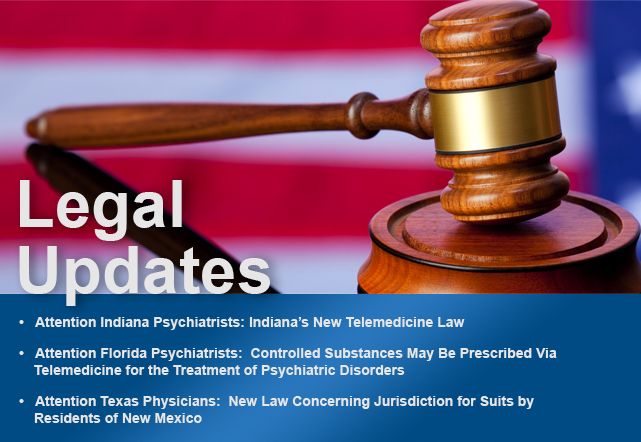 Indiana’s new telemedicine law implementing numerous telemedicine practice standards and remote prescribing rules became effective July 1, 2016.1  The new law replaces the Indiana Telehealth Pilot Program and may potentially require the Board of Medicine to rewrite some of the current telemedicine regulations that conflict with the new law.2  The new law applies to physicians, optometrists, nurse practitioners and physician assistants with prescriptive authority. Among other things, the new law permits providers to write certain prescriptions without having to physically examine the patient first.3

Some additional areas regulated by the new law include:

Please consult with your local attorney or risk management professional with any questions regarding Indiana’s new telemedicine laws.

Attention Florida Psychiatrists: Controlled Substances May Be Prescribed Via Telemedicine for the Treatment of Psychiatric Disorders

According to the New Mexico Medical Society, in 2013, approximately 13 counties in New Mexico sent more than 22% of their patients to Texas for medical care. Recently, New Mexico enacted a law that will be effective July 1, 2016 through July 2019, that allows Texas physicians to have their New Mexico patients sign statements accepting the jurisdiction of Texas courts in the event the patients want to sue their healthcare provider.

The newly enacted law allows for a compromise while the New Mexico Supreme Court decides the outcome of the current case.

In Session with Allied World is a quarterly newsletter provided as a service to AACAP members by Allied World. Allied World, through its subsidiaries, is a global provider of innovative property, casualty and specialty insurance and reinsurance solutions, offering superior client service through a global network of offices and branches. Allied World is the AACAP sponsored carrier for the professional liability program through its strategic relationship with the American Professional Agency, Inc., the Program Administrator.