According to the United States Census Bureau, by the year 2035 all baby boomers will be over the age of sixty-five.1 Approximately 15% of adults aged 60 and over suffer from a mental disorder, and as the population ages, the need for geriatric psychiatric services will continue to increase.2

Geriatric psychiatry practice focuses on the prevention, evaluation, diagnosis and treatment of mental and emotional disorders in the elderly. Geriatric psychiatrists are key members of multidisciplinary teams responsible for evaluating and treating elderly patients. 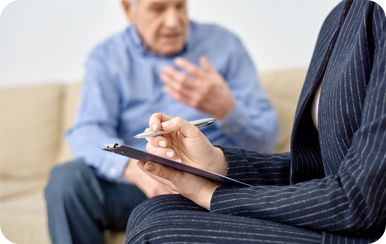 Aging can create inherent risks, such as late-life alcohol or substance misuse, thoughts of suicide, increased risk for falls, diminishing ability to operate a motor vehicle safely, as well as issues with declining decision-making capacity or competency. Geriatric psychiatrists must identify and manage the clinical care and potential liability exposures associated with these inherent risks. This article focuses on risk management strategies designed to reduce potential liability exposures when practicing geriatric psychiatry.

While capacity and competence tend to be used interchangeably, there is a difference between the two. Competency is a legal term, not a medical term, established by the courts to refer to the degree of mental soundness necessary to make decisions about a specific issue or carry out a specific task. Capacity is defined as an individual’s ability to make an informed decision. A licensed medical professional can determine capacity. Capacity is the basis for informed consent, and an individual who lacks capacity and unable to make an informed decision or give consent may need referral for a competency hearing or may need a guardian appointed. Although capacity usually is defined by state law and varies by jurisdiction, generally patients are deemed to have medical decision-making capacity if they can express:3

Consider conducting a formal capacity assessment in situations where an individual’s decision-making capacity is unclear, disagreement among surrogate decision-makers exists, or judicial involvement is anticipated. As with any assessment, documentation should be thorough and include:

As patients age, they can experience generalized weakness that can increase the risk for falls. The use of psychotropic medications in the elderly can further compound the risk of falling due to over-sedation and cognitive impairment. As such, prior to prescribing psychiatric medications, evaluate and document a review of the patient’s medical history and current medications, along with any consultations conducted with the patient’s other treating physicians.

Additional risk management considerations to reduce a patient’s fall risk may include:

Elderly drivers experiencing cognitive impairment and dementia may no longer be safe to drive, both for their safety and for the safety of others. Moreover, the use of psychotropic medications may further decrease the patient’s ability to drive safely. To ensure public safety, health professionals are obligated to identify conditions that might compromise the driving abilities of patients.4 To address the issue of impaired drivers, many states have enacted laws mandating disclosure of potentially impaired drivers to motor vehicle authorities, while other states have enacted more permissive reporting laws.5

As part of the informed consent process, prior to prescribing medications that may affect the patient’s driving ability, psychiatrists should discuss the potential risks with the patient and their caregivers. Additionally, document conversations with the patient, family, department of motor vehicles, and other providers regarding the patient’s ability to drive and steps taken to avoid future unsafe driving.

As people age, and given the higher incidence of comorbid medical problems, elderly patients are particularly susceptible to medical consequences associated with substance misuse. Further, combining alcohol or recreational drugs with prescription medication can result in significant medical and safety issues. Numerous studies continue to establish the co-occurrence of substance misuse and psychiatric illness in elderly patients. As such, in addition to a psychiatric and social evaluation of a new patient, the evaluation of a first-time elderly patient should include:

The medical record should include thorough documentation of the above, as well as a contemporaneously updated treatment plan and thorough informed consent process including Medication Assisted Treatment (MAT), if recommended. Additionally, documentation should include a plan of managing potentially serious side effects associated with MAT use in the elderly.6

In the United States, suicide has become a more common occurrence among older adults. In fact, one of the highest rates of suicide in the U.S. occurs among white males ages 85 and older, at over four times the nation’s overall rate.7 Further, older adults tend to use firearms and usually die on their first attempt. They are also less likely to express suicidal ideation. Factors such as functional impairment, multiple comorbidities, chronic pain, social isolation and loneliness increase the risk of suicide.8

Tracking suicide in the elderly has been difficult. There are no Federal regulations requiring the reporting of suicide and most states do not track it or will not disclose the information. Even older adults residing in long term care facilities under closer supervision than those living independently, have been successful in committing suicide, including through the use of firearms.

Addressing depression and assessing for suicidal thoughts is important in this population. Addressing these issues may include consulting with the patient’s other medical providers to address reducing pain and increasing functionality. Documentation of care needs to include:

Approximately 1 in 10 Americans aged 60+ have experienced some form of elder abuse. Studies show that approximately 60% of incidents of elder abuse, neglect, and/or financial exploitation occur at the hands of a family member.9 Elder abuse and/or neglect is generally defined as an act of commission or omission that results in harm or threatened harm to the health or welfare of an older adult. Elder abuse may include:10

Oftentimes, those abusing an elder do not recognize their behavior as abusive. In addition, the elderly psychiatric patient may not recognize that they are being abused or exploited, especially if done by a family member.

Financial exploitation occurs when a person misuses or takes the assets of a vulnerable adult for his/her own personal benefit. This frequently occurs without the explicit knowledge or consent of a senior or disabled adult, depriving him/her of vital financial resources for his/her personal needs. Assets are commonly taken through deception, false pretenses, coercion, harassment, duress and threats.11

In most states, physicians have professional and legal obligations regarding assessing, diagnosing and reporting of suspected elder abuse/exploitation. Lack of decision-making capacity and/or competency issues may make diagnosing and treating elder abuse difficult. If any type of abuse is identified or suspected, it is important to report the abuse to the authorities in accordance with state laws and professional obligations. Lack of reporting may result in ethical and legal implications. As with the discussion above regarding physician obligations to report impaired drivers, the laws regarding reporting elder abuse and/or exploitation vary among the states. Thus, it is important for psychiatrists to understand the reporting obligations in their specific jurisdiction.

Assessing elderly patients using an evidence-based tool can help the psychiatrist detect potential elder abuse. Again, it may be necessary to obtain collateral information from involved third-parties, after obtaining patient/guardian consent. As with the other areas discussed, thorough documentation of the assessment and reporting of potential elder abuse is a critical risk management tool. For more information on your state reporting obligations, see: The National Center on Elder Abuse (https://ncea.acl.gov/Resources/State.aspx) and the National Adult Protective Services Association (https://www.napsa-now.org/).

In geriatric psychiatry, as with many areas of psychiatry practice, documentation of assessments conducted, treatment plans developed and patient response is one of the most effective risk management strategies to reduce associated liability exposures.

Allison has over 30 years of experience in medical professional insurance industry. She assisted in the ground up build-out of two successful medical professional insurance carriers. Allison is an active member of the Connecticut Society for Healthcare Risk Management (CSHRM) and has served on their board in positions of Director, Treasurer and President. Allison is a member of the American Society of Healthcare Risk Management (ASHRM) and the American College of Healthcare Executives (ACHE). Allison frequently speaks on national, regional and local levels on topics related to claim and risk management.

Allison earned her B.A. degree from SUNY Stony Brook and her M.P.A. degree from Long Island University with a concentration in health care management. Allison has her Associate in Risk Management and Casualty Claims Law Associate designations.

9 National Council on Aging, “What is elder abuse?” https://www.ncoa.org/public-policy-action/elder-justice/elder-abuse-facts/.